In November 2014, the American Psychological Association appointed David Hoffman, Esq., of the Chicago law firm Sidley Austin, to assess whether there was any factual support for the assertion that the APA engaged in activities that would constitute collusion with the Bush administration to promote, support, or facilitate the use of enhanced interrogation techniques by the United States in the war on terror.

This is an astonishing accusation to be leveled against a professional organization that is charged with establishing and enforcing an ethical code for its members and, furthermore, with representing the public face of that profession in America. For close to a decade psychologists, both members of the APA and those who had resigned in face of the growing evidence that this charge was correct, have been asking for such an investigation. Nonetheless, and true to the APA’s practice of ignoring critics from within the profession, the appointment of the independent reviewer was made not in response to members’ protest and resignations, but after the publication of James Risen’s 2014 book, Pay Any Price: Greed, Power and Endless War.

The 542-page report, http://bit.ly/KenPopeFullTextOfHoffmanReport, released by the New York Times on July 10, 2015, concludes that prominent psychologists worked closely with the C.I.A. and D.O.D. to blunt dissent inside the APA over an interrogation program that is now known to have included torture. It also finds that officials at the American Psychological Association colluded with the Pentagon to make sure that the association’s ethics policies did not hinder the ability of psychologists to be involved in the interrogation program.

In many ways this report reveals as much about the APA’s stance on torture as it does about the duplicitous culture that has been rife throughout the organization. For over ten years, by lying, denying, and deceit, the Ethics director, CEO, vice CEO, director of communications, APA general counsel, and various elected presidents of the association worked to keep the special relationship with the DOD secret in the face of mounting protests from the membership. Some of the key players have now left the organization but others remain.

We asked ourselves whether the American Psychological Association had the will and the ability to reconstitute itself, to restore the public’s trust, and, perhaps more importantly, the good faith of its members and former members in the face of the Special Investigator’s scandalous report. In 2015 it appeared as if a corner had been turned; at the annual convention, the Council of Representatives voted overwhelmingly to no longer support the presence of psychologists in Guantanamo Bay. But, three years later in August 2018, the APA Board of Directors lent their support to a bill sponsored by two members of the Military Division of the APA calling for the return of psychologists to Guantanamo. The response from those within the APA who had fought long and hard to have psychologists removed from this site that is in violation of international human rights laws, from those who had left the APA in protest ten years earlier, and from over a dozen human rights groups was so powerful that the bill failed to carry by a wide margin: 61% of the council of representatives voted against it, 33% voted for it, and 6% abstained.

You can read about this most recent struggle including letters from the human rights groups and other activists here: http://allianceforanethicalapa.com/

For those interested in learning more about the history of the protest against the APA by mental health professionals that began in 2006, the Columbia University Oral History Rule of Law Archive contains first person accounts by several of these professionals including: Dan Aalbers, Ghislaine Boulanger, Steven Reisner, Stephen Soldz, and Stephen Xenakis, in addition to interviews with detainees, pro bono lawyers working on their behalf, jurists, and reporters.

In 2017, The International Journal of Applied Psychoanalytic Studies published a special issue on the American Psychological Association and the War on Terror. https://onlinelibrary.wiley.com/doi/full/10.1002/aps.1524

I was delighted to have been invited to edit this special issue. The essays in this volume examine the impact of the American Psychological Association’s decision to collaborate with the Department of Defense in the years following the September 11 attacks in 2001, while simultaneously denying this collaboration both to their members and to the public at large for over a decade. And I was equally delighted to publish such rich and revealing accounts from a number of psychologist psychoanalysts. Each of the authors in this issue was implicated in and deeply affected by the APA’s covert program. Whether they were working for the APA, volunteering time on a key task force, evaluating detainees in Guantanamo Bay who had experienced firsthand the intentional brutality that this cynical yet unacknowledged alliance between a government program run amok and a professional association fostered, or whether they found ways to turn their skepticism into meaningful protest, each of these authors has provided us with a deeply personal account, for at this level of betrayal, personal and professional implicate one another. Among those contributing essays were: Bryant Welch, Nina Thomas, Sara Schoen, Jeanne Wolf Bernstein, and Frank Summers. 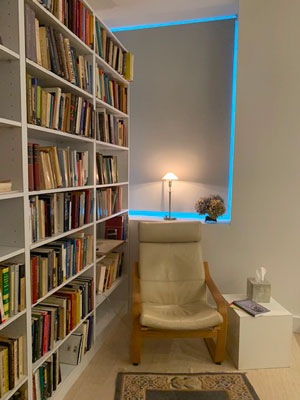